PT CARAKA WISATA TOUR PT Caraka Wisata Tour is a Travel Agent established in 1993 and located in center of Jakarta. We are a

PT Caraka Wisata Tour is a Travel Agent established in 1993 and located in center of Jakarta. We are a member of ASITA (Association of Indonesian Tour & Travel Agencies) and HIMPUH (Himpunan Penyelenggara Umrah dan Haji - Group of Travel Agents in Hajj and Umrah). Caraka Wisata Tour has been growing its business to become travel consultants by providing travel services consisting of:

Hajj & Umrah is our first core competence that has been providing satisfactory Islamic ritual tour for more that 15 years to many pilgrims. We are legal travel agent in Umrah and Hajj in Indonesia with Legal Permit for Umrah (Izin Umrah) No. D/458/2010, and for Hajj (Izin Haji) No.D/457/2009.

We can provide on-line booking systems for International & Domestic Ticket from many major Airlines with competitive prices, quick response and immediate delivery.

Our services include making new passport, re-new passport, getting the VISA from many major destination countries as well as any other supporting traveling documents.

We can help you to make reservation to many hotels around the globe with competitive rates.

To accommodate special family or personal interest, we can also arrange customized tour that fulfills the specific interest, such as adventure tour, family trip, etc.

Among the people those have traveled for Umrah and Hajj with us are: 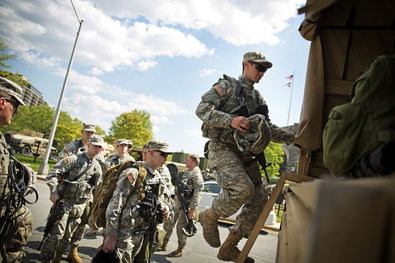 National Guard soldiers boarding a truck in Baltimore on Sunday.

Baltimore residents prepared to resume the more familiar rhythms of their lives as days passed without new bouts of widespread rioting and as the National Guard began to pull its troops from the city.

As he reflected on the festering wounds deepened by race and grievance that have been on painful display in America’s cities lately, President Obama on Monday found himself thinking about a young man he had just met named Malachi.

A few minutes before, in a closed-door round-table discussion at Lehman College in the Bronx, Mr. Obama had asked a group of black and Hispanic students from disadvantaged backgrounds what could be done to help them reach their goals. Several talked about counseling and guidance programs.

“Malachi, he just talked about — we should talk about love,” Mr. Obama told a crowd afterward, drifting away from his prepared remarks. “Because Malachi and I shared the fact that our dad wasn’t around and that sometimes we wondered why he wasn’t around and what had happened. But really, that’s what this comes down to is: Do we love these kids?”

Many presidents have governed during times of racial tension, but Mr. Obama is the first to see in the mirror a face that looks like those on the other side of history’s ledger. While his first term was consumed with the economy, war and health care, his second keeps coming back to the societal divide that was not bridged by his election. A president who eschewed focusing on race now seems to have found his voice again as he thinks about how to use his remaining time in office and beyond.

In the aftermath of racially charged unrest in places like Baltimore, Ferguson, Mo., and New York, Mr. Obama came to the Bronx on Monday for the announcement of a new nonprofit organization that is being spun off from his White House initiative called My Brother’s Keeper. Staked by more than $80 million in commitments from corporations and other donors, the new group, My Brother’s Keeper Alliance, will in effect provide the nucleus for Mr. Obama’s post-presidency, which will begin in January 2017.

“This will remain a mission for me and for Michelle not just for the rest of my presidency but for the rest of my life,” Mr. Obama said. “And the reason is simple,” he added. Referring to some of the youths he had just met, he said: “We see ourselves in these young men. I grew up without a dad. I grew up lost sometimes and adrift, not having a sense of a clear path. The only difference between me and a lot of other young men in this neighborhood and all across the country is that I grew up in an environment that was a little more forgiving.”

The alliance, while nominally independent of the White House, may face some of the same questions confronting former Secretary of State Hillary Rodham Clinton as she begins another presidential campaign. Some of those donating to the alliance may have interests in government action, and skeptics may wonder whether they are trying to curry favor with the president by contributing.

“The Obama administration will have no role in deciding how donations are screened and what criteria they’ll set at the alliance for donor policies, because it’s an entirely separate entity,” Josh Earnest, the White House press secretary, told reporters on Air Force One en route to New York. But he added, “I’m confident that the members of the board are well aware of the president’s commitment to transparency.”

The alliance was in the works before the disturbances last week after the death of Freddie Gray, the black man who suffered fatal injuries while in police custody in Baltimore, but it reflected the evolution of Mr. Obama’s presidency. For him, in a way, it is coming back to issues that animated him as a young community organizer and politician. It was his own struggle with race and identity, captured in his youthful memoir, “Dreams From My Father,” that stood him apart from other presidential aspirants.

But that was a side of him that he kept largely to himself through the first years of his presidency while he focused on other priorities like turning the economy around, expanding government-subsidized health care and avoiding electoral land mines en route to re-election.

After securing a second term, Mr. Obama appeared more emboldened. Just a month after his 2013 inauguration, he talked passionately about opportunity and race with a group of teenage boys in Chicago, a moment aides point to as perhaps the first time he had spoken about these issues in such a personal, powerful way as president. A few months later, he publicly lamented the death of Trayvon Martin, a black Florida teenager, saying that “could have been me 35 years ago.”

That case, along with public ruptures of anger over police shootings in Ferguson and elsewhere, have pushed the issue of race and law enforcement onto the public agenda. Aides said they imagined that with his presidency in its final stages, Mr. Obama might be thinking more about what comes next and causes he can advance as a private citizen.

That is not to say that his public discussion of these issues has been universally welcomed. Some conservatives said he had made matters worse by seeming in their view to blame police officers in some of the disputed cases.

“President Obama, when he was elected, could have been a unifying leader,” Senator Ted Cruz of Texas, a Republican candidate for president, said at a forum last week. “He has made decisions that I think have inflamed racial tensions.”

On the other side of the ideological spectrum, some liberal African-American activists have complained that Mr. Obama has not done enough to help downtrodden communities. While he is speaking out more, these critics argue, he has hardly used the power of the presidency to make the sort of radical change they say is necessary.

The line Mr. Obama has tried to straddle has been a serrated one. He condemns police brutality as he defends most officers as honorable. He condemns “criminals and thugs” who looted in Baltimore while expressing empathy with those trapped in a cycle of poverty and hopelessness.

In the Bronx on Monday, Mr. Obama bemoaned the death of Brian Moore, a plainclothes New York police officer who had died earlier in the day after being shot in the head Saturday on a Queens street. Most police officers are “good and honest and fair and care deeply about their communities,” even as they put their lives on the line, Mr. Obama said.

“Which is why in addressing the issues in Baltimore or Ferguson or New York, the point I made was that if we’re just looking at policing, we’re looking at it too narrowly,” he added. “If we ask the police to simply contain and control problems that we ourselves have been unwilling to invest and solve, that’s not fair to the communities, it’s not fair to the police.”

Moreover, if society writes off some people, he said, “that’s not the kind of country I want to live in; that’s not what America is about.”

His message to young men like Malachi Hernandez, who attends Boston Latin Academy in Massachusetts, is not to give up.